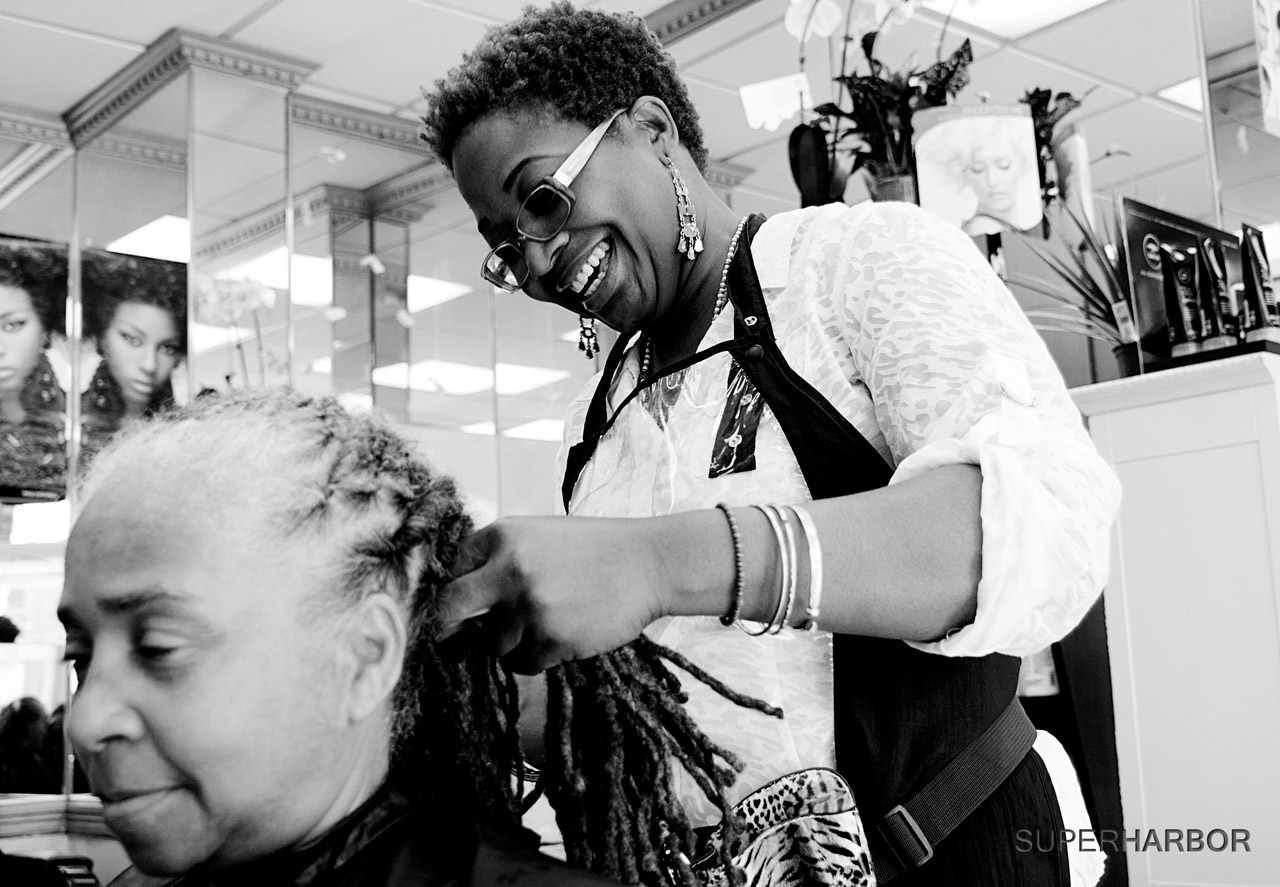 While new businesses are a bundle of joy the growing pains are undeniable. At this time in a business’s life span it’s even more necessary to be resourceful and take advantage of every asset a small business owner has at their disposal.

In this case, Baltimore-born Ayaba an established stylist for over 20 years took the next step and opened her own salon in Park Slope called Breathe Easy Spa. The story of her new business is a case study in tapping into the many resources available to you.

While this is Ayaba’s first time as salon owner, she’s amassed a faithful clientele over the years, some who followed her from her previous salon, Salon Bohemia.

In Ayaba’s chair on a recent Saturday morning was Renee Waddy. When asked how long Ms. Waddy’s been seeing her, Ayaba held up a loc longer than a standard ruler and says “this many years.” That loc represented 14 years of styling, retwisting, and loc maintenance.

When Ms. Waddy first got her locs the technician used “gooky” products. That sent Ms. Waddy on a search for a new stylist. Asking around she found Ayaba.

“She knows her product,” said Ms. Waddy. Other attributes Ms. Waddy loves about Ayaba is that she’s personable, gives her clientele what they ask for, has good energy and is very social. “It matters to me who put their hands in my hair,” Ms. Waddy elaborated.

After putting Ms. Waddy in the dryer, Kali Holloway sat down in the chair for her turn.

“First couple of times she basically insulted every hair decision I made,” said Kali. Kali and Ayaba chuckled at the memory. “My 12 year old knows not to do that,” Kail recounted Ayaba saying of her choices to use certain products. Kali didn’t mind the playful ribbing behind it because “you’re the professional tell me what I’m doing wrong.”

Kali’s been seeing Ayaba faithfully for a year except for one time she went to a salon in the Meatpacking District which she described as a “staggeringly expensive experience” where a wash and set was $200.

Ayaba was inspired to do hair. She grew up in Baltimore doing her friend’s hair. “I knew I didn’t want to get a 9-5 job, so what the heck.”

When she first started “I was pretty bad at it. Now I know what not to do.”

“I’m a duck, water falls off your back.”-Ayaba

Ayaba having mastered hair, as evidenced by Ms. Waddy’s polished crown of locs, is now learning to master being the boss of her own business. She’s still in the midst of installing Wi-Fi to get Square working.

It’s a small, but personable operation. There is no receptionist. Other than Ayaba there are two other stylists, Patty Font who’s been a stylist for 20 years, and a natural hair technician.

“I didn’t get my awning when I wanted, didn’t get my cards,” she said, but she’s not worried. “I’m a duck, water falls off your back.” With the awning not coming in when she planned she thought of the idea to have her god brother, who did the mural on Park Place and Rogers, to paint it instead.

How To Be In a Great Space

A little bit of faith doesn’t hurt when looking for a space. “I prayed. I need a place I can walk into,” she said. Shortly after she found a spot on Craig’s List. When the realtor “blew me off” she checked out the space herself. The landlord asked her merely for one month’s rent and one month’s security. “He said, ‘Whoever brings me money first.’ I told him I’ll be here tomorrow,” said Ayaba.

The mother of four has been taking business classes for years at various places like the Fashion Institute of Technology and Medgar Evers College. She registered her DBA (Doing Business As) back in 2003. Now with more artillery in her belt like her stylists, a space, her loyal clients and more than a decade of experience in 2013 she said “I’m ready.”

The Evolution of a Creative Entrepreneur-The Brooklyn Swirl Way

How the Williamsburg Seamster Comes Out on Top

While working at Compound Cowork’s Work Exchange Program I had the opportunity to collaboratively plan an event-Career Night At The CC. One of a co-working spaces greatest resources are their members and this Prospect-Lefferts Garden space was no exception with a … END_OF_DOCUMENT_TOKEN_TO_BE_REPLACED

If it seems like a new co-working space is opening up every year it’s because they are. Hard pressed to find one five years ago in Brooklyn there is currently almost 30 spread throughout the borough. Colab Factory is … END_OF_DOCUMENT_TOKEN_TO_BE_REPLACED