Before opening the first co-working space in Prospect Lefferts Gardens the three co-owners, Aki and Ron Baker and Rebecca Levin were neighbors for years in a loft building in Bed-Stuy.

“Their front door faced my front door and we shared a backyard with a bunch of other neighbors,” said Rebecca. “We started collaborating informally by…throwing parties and then it evolved into fundraisers [for nonprofits and small organizations]. Aki was the queen of fundraising,” she said referring to Ron’s wife and Compound Cowork co-owner.

While a number of spaces have been open for years in trendier neighborhoods like Williamsburg and DUMBO the number of spaces opening in neighborhoods not known for their tech savvy like Crown Heights and Bed-Stuy have started to appear as well. Spaces like Dean Machine are being run by individuals looking to provide another option for freelancers and independent workers.

Prospect Lefferts Gardens in Brooklyn is as far from the tech scene as one can imagine. So it’s a good thing that the only co-working space that has sprung up in the neighborhood is looking to serve entrepreneurs of various backgrounds. Before their official opening, the space had 9 members. “We have a couple who does chiropractic work. A guy working on his PhD. We have a web developer a writer. A Haitian non-profit and a couple of realtors,” explained Rebecca. 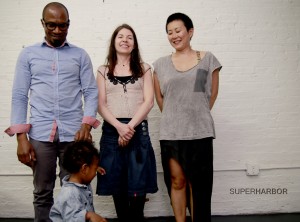 Officially launched in June the space has been hosting Wellness Wednesday where they round up vendors in the wellness industry for greater exposure.

“As a small business person I know what it’s like to work from home,” said co-owner Ron. The trio were aiming to create an environment that would “make it easy for people to work, get their exercise, be able to communicate with one’s neighbors and collaborate with the people around us.”

The space, designed by Ron who owns a building design company, is constructed mostly, if not all, out of reclaimed and recycled parts. The table in the conference room was salvaged from the wood of a water tank for example.

In the main space off the side there’s a raised wood platform filled with bean bag chairs and a wood shelf for those who like to stand while they work. Private suites are on the perimeter, their doors painted orange with wooden slacks for windows-a bright, colorful homage to Ron’s Jamaican roots. A conference room resides across the hall equipped with a TV for presentations and the like.

Ifetayo Cultural Arts Academy is slated to move in on the third floor. Down the hall from Compound Cowork is a recently opened Bikram yoga studio.

“We’re paying attention to how our members are moving,” said Rebecca. “We’re tuning into what they need. Whoever chooses to work will help us decide what we need how to evolve this space.”

“We’re really coming at this from a community-building standpoint,” said Ron.

Remote Working from Brooklyn: Make The Most of the Coffee Shop

While working at Compound Cowork’s Work Exchange Program I had the opportunity to collaboratively plan an event-Career Night At The CC. One of a co-working spaces greatest resources are their members and this Prospect-Lefferts Garden space was no exception with a … END_OF_DOCUMENT_TOKEN_TO_BE_REPLACED

If it seems like a new co-working space is opening up every year it’s because they are. Hard pressed to find one five years ago in Brooklyn there is currently almost 30 spread throughout the borough. Colab Factory is … END_OF_DOCUMENT_TOKEN_TO_BE_REPLACED