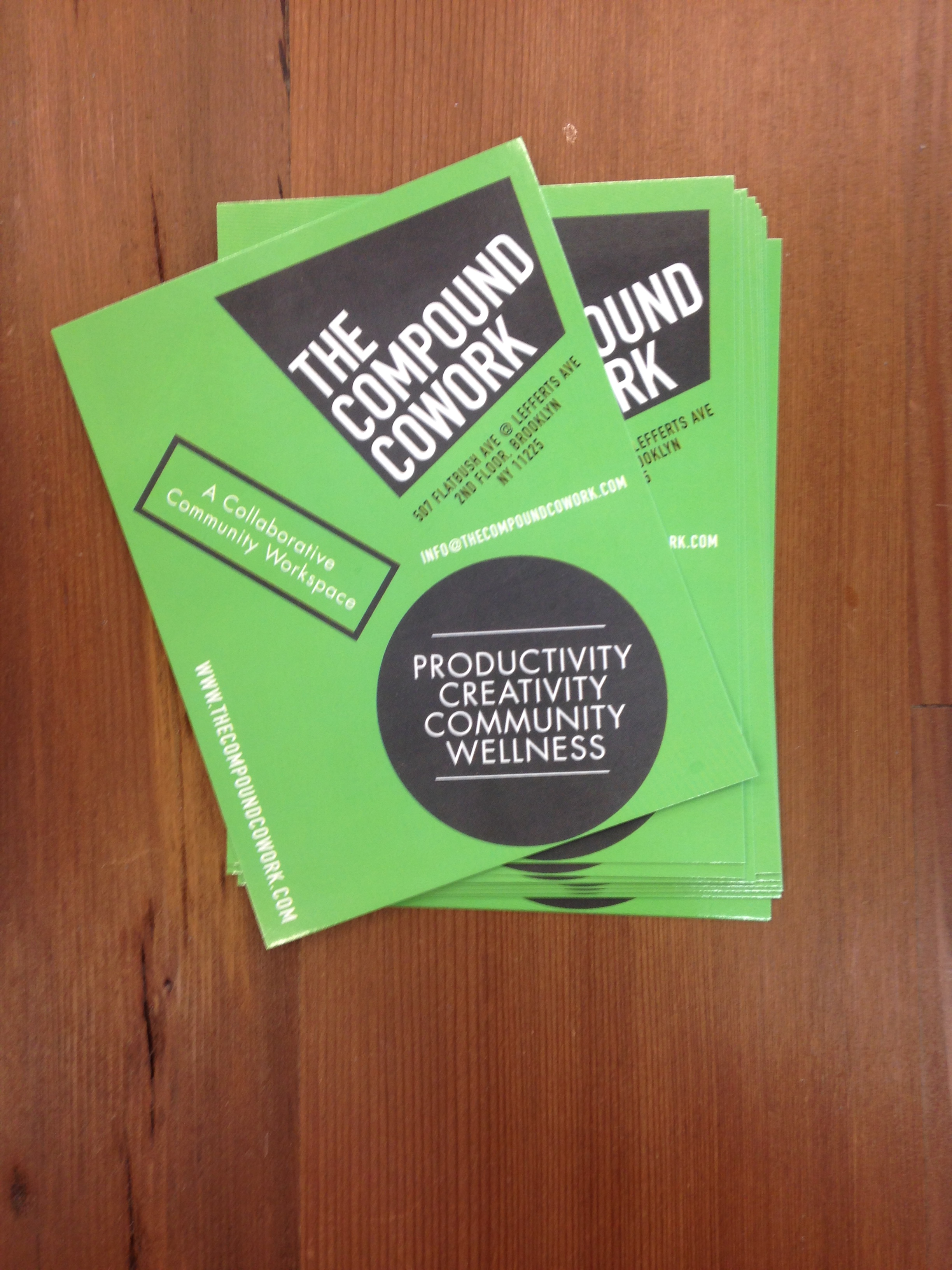 Run by a community-minded trio, Compound Cowork had a free day of co-working, from 1pm-8pm, this past Saturday to officially commemorate their opening. Normally, a day of co-working at the space will set you back $30. Monthly memberships which cost from $225 to $800 depending on the options include wi-fi, printing, faxing and 24-7 access to the facilities.

Despite these familiar pricing tiers offered by similar spaces this is not your average co-working space- the children of those running the space were helping their parents set up for the momentous day; the founders are considering having a daycare for members; a jazz band performed in the space, presumably for members, the day after. 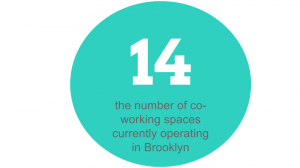 lled spacious feeling. One of the co-founders, Ron, who’s been a general contractor for 15 years and owns the design and contracting firm Baker Design + Build was mainly responsible for the look and design of the space. Power plugs are suspended from a pulley above each desk that can be pulled down to use by all except the shortest of freelancers. The private offices have wooden slats in the windows and orange doors reminiscent of homes in the Caribbean. You can spot an orange Ergo Ergo  or two as one of the seating options.

Aki Hirata-Baker, Ron Baker, and Rebecca Levin built out the space during this past winter’s vexing polar vortex delaying the original timeline. They were all neighbors at one point throwing informal parties and fundraisers in a loft space in Bed-Stuy. To build on the community concept they considered a number of options before embarking on co-working.

The Low Down on the Compound 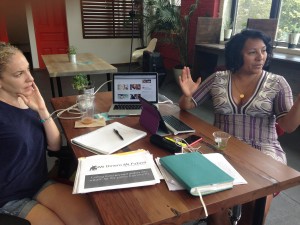 Ramona Ortega and Gina Pellegrini of My Money, My Future

One of the entrepreneurs to try out the space were Ramona Ortega and Gina Pellegrini of My Money, My Future an early-stage startup currently looking to raise seed money.

“We’re so much more productive together,” said Ramona. The ladies were working on a pitch deck for an upcoming presentation. While the location works for Ramona- she lives in the neighborhood – they voiced the concern that the commute for Gina who lives in Washington Heights, might prove a bit much. That and they might be setting their sights on a co-working space that’s more tech oriented.

Another entrepreneur meeting up with a partner was Anita Boeninger the proprietor of the holistic health education consulting company Embodied Femme. Also from the neighborhood its important to her to find a friendly co-working space.

Compound Cowork is a “creative space for people to work how they want to work.” Current members include a Haitian non-profit, realtors, writers, a web developer, and a holistic chiropractor.

Is Northside Really Serving Up Innovation?

While working at Compound Cowork’s Work Exchange Program I had the opportunity to collaboratively plan an event-Career Night At The CC. One of a co-working spaces greatest resources are their members and this Prospect-Lefferts Garden space was no exception with a … END_OF_DOCUMENT_TOKEN_TO_BE_REPLACED

If it seems like a new co-working space is opening up every year it’s because they are. Hard pressed to find one five years ago in Brooklyn there is currently almost 30 spread throughout the borough. Colab Factory is … END_OF_DOCUMENT_TOKEN_TO_BE_REPLACED