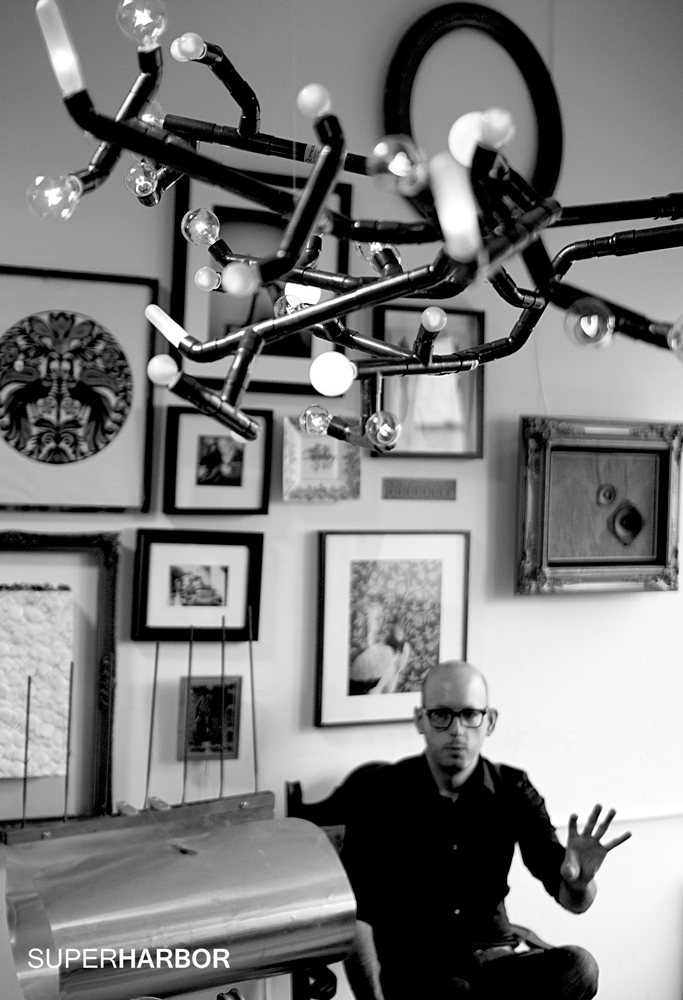 This is the second installment to Meet an Artist at 35 Claver Place. For the first installment we interviewed Kennis Baptiste.

Joel Mellin is a composer, engineer and web developer I met during the SONYA stroll. Since he moved to Brooklyn four years ago he’s lived at 35 Claver Place. He builds sculpture pieces as well and many of the objects in his beautiful home including the light centerpiece above his dining room were made by him.

“I have a degree in electrical engineering from the University of New Hampshire. After school I actually worked on a NASA funded gamma ray observation satellite in New Hampshire. I was an engineer on the project. I was developing circuits solar-powered stuff. [I] got bored with it. What I really wanted to focus time on was music ‘cause you know that’s a good career move. That’s the way to bring in the dough.” He chuckled.

“I came to graduate school in NYU [New York University] to study music technology. It was there that I actually got to work with this guy Didkovsky. He created this musical language for computers called the Java Music Specification Language and I fell in love with it.

It was really abstract. I was never in band in high school. I took piano lessons when I was young, but I was terrible at reading music. I was always terrified of situations where you had to do that, so there was something about this computer programming language. I can come up with any idea that I want and I could use [it] to generate sound and generate music. This is something I can do to realize artistic thoughts that has nothing to do with normal Western music notation.

I’ve been working on stuff off and on..that includes trying to use genetic algorithms to try and evolve things like language. When I was there at NYU it’s basically taking the framework of evolution the structure of it and applying it to something else. It’s used a lot in protein sequencing when you’re trying to figure out how to create a new bond between a new thing.

I am not a star math/science person. I know enough to get my hands dirty. I actually worked on some stuff trying to create a thunderstorm by using some mathematical techniques.”

“Over the past five years really I started studying Balinese gamelan. This was a pretty serious leap for me artistically to go from writing computer program[s] that generate these abstract things to actually writing score for music for people to play.

There’s an intricacy in the music. It’s similar to the sophistication and intricacy I’ve found in doing a lot of the computer stuff. I personally find it a beauty.

There’s also a fascinating philosophy permeating all the music that is there are no soloists. The music is based on everyone playing together to form a greater whole. So much so that a lot of the melodies are so fast and interlocked they’re actually broken up between two performers. In that way in order to form a complete melodic line two people actually have to be playing together correctly. It just means that as a performer and as a musician you have to be very in tune with the people that you’re playing with.”

Advice to Other Artists

Joel suggests Materials for the Arts, a central hub where people can donate and artists can receive free supplies. They have a warehouse whose inventory changes every week. From his time there he’s seen a lot of office equipment, and theater chairs.

Joel decided he wanted unique album art for the gamelan album Synesthesia. After creating a pattern using the chladni plate (see video above) he would affix the pattern to the albums.

Is The Yard The Place to Be If You’re a Creative Business In Brooklyn?

What to Say in Social Media- Barbershop Edition 1-20

While working at Compound Cowork’s Work Exchange Program I had the opportunity to collaboratively plan an event-Career Night At The CC. One of a co-working spaces greatest resources are their members and this Prospect-Lefferts Garden space was no exception with a … END_OF_DOCUMENT_TOKEN_TO_BE_REPLACED

If it seems like a new co-working space is opening up every year it’s because they are. Hard pressed to find one five years ago in Brooklyn there is currently almost 30 spread throughout the borough. Colab Factory is … END_OF_DOCUMENT_TOKEN_TO_BE_REPLACED