Meet an Artist from 35 Claver Place 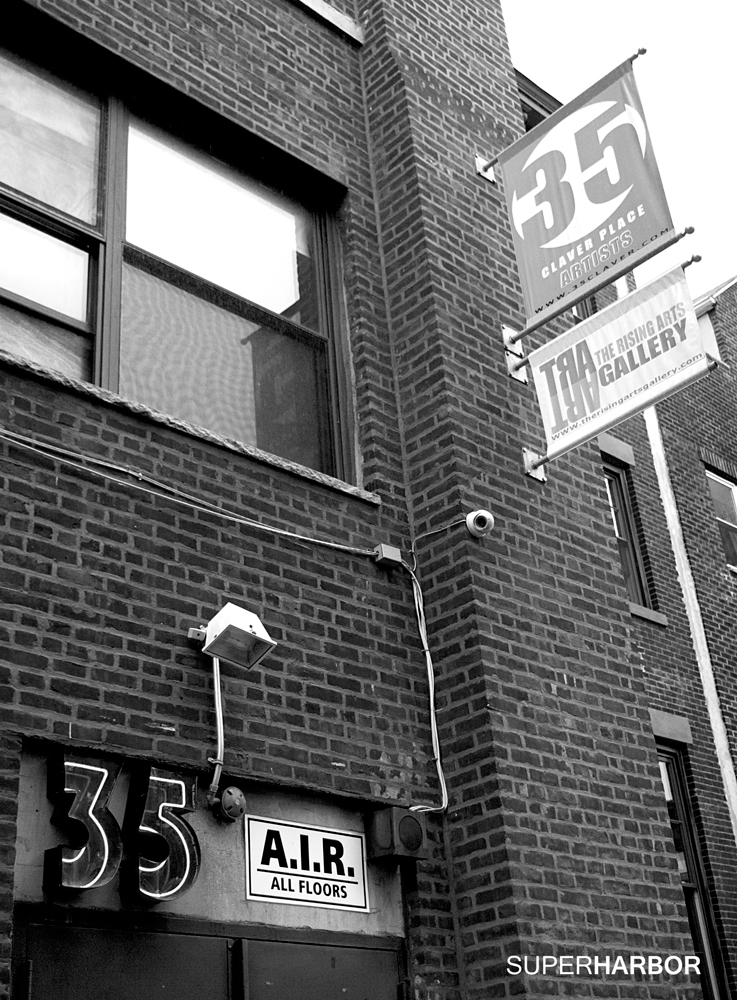 You might pass it by everyday and not even notice it if you live by the Franklin Ave. C stop, but the truth is 35 Claver Place is a building in Bed-Stuy that serves as living/work space for visual, and performing artists. One of the artists who live here is Kennis, a Granadan born painter and screen printer who came over here when he was eight-years-old. Let’s meet the artist neighbor you didn’t even know you had shall we?

How did you get into drawing and painting?
Back in 1999 in Drummer’s Grove. It’s an area in Prospect Park that’s been going on for years in the Parkside area. It’s a very spiritual area. Everybody just shows up with an instrument and just play. People are dancing…playing. In the summertime they’re always there. Out on Sundays you can hear the drums. I just sat there with a [drawing] pad…sketching as quickly as I can. [I was] just experimenting in how to capture movement, a unique way to capture movement.

Are you traditionally taught?
No, I’m not traditionally taught. I went to school, Buffalo State, for electrical engineering. I didn’t go to any formal academic but being a part of a few artist organizations and being an artist of the community I’ve connected with a lot of artists. We learn from each other. Anything I need, I’ll find the books. Read about it. I’ll get some information from a lot of the teaching artists. There’s a lot of knowledge out there in the art community you can learn from and I just build from that.

How did you end up in 35 Claver Place?
I used to have a studio not too far from here. I was living in East Flatbush and I’m a part of this organization South of the Navy Yard Artists. Before I was a board member, I was a participating artist. They used to have a gallery right around the corner. Another artist and I we actually teamed up together to do a group show there. During that time we had to do our gallery hours.

While I’m sitting there, the landlord [of 35 Claver Place] came by. His name was Anthony Chamberlain. He was really impressed by the work. He said, ‘I have this art space around the corner.’ He was considering using the ground floor as a gallery for the building.

He spoke of the issues of both managing the building and running a gallery. They [Anthony and his wife Gina Inverso] were kind of ironing it out. During the stroll I decided to come over here to see the work. I was blown away. I just put a bug in their ear: ‘this place is amazing you should rent it out and whoever’s renting it out let them take the responsibility of doing the gallery, because its a perfect space.’

After a while, he offered the space to me as an artist. He liked the work, knew I could afford it and good energy between us made it happen. I told him my last studio space was used as a part-time gallery as well.

He recently passed away a few months ago. Great, great guy.

I think it’s so interesting you’re an artist and an engineer being the two are so right-brained, left-brained respectively.
I’ve always been an artist. I’ve always been creative. My father’s a master electrician. His company is called Rem and Son, so his sons are working. As a child we were working with him on the weekends consistently. His thing was to get us involved to continue the business. For me I learned a lot. I didn’t want to get my hands dirty anymore so I decided to go to school and take my knowledge to another level so that’s what I studied. I had the intention of getting that background and then coming back, but I got a job with the City. Working with my father provided a lot of potential but the City provided better benefits. I have younger brothers who are working with him. They’re doing it and they’re making a good living for themselves.

How often do your pieces sell?
I don’t push the sales. I have a following with people who keep tabs on the new stuff. Whenever I create a new series I send it out to my list of people. Some people make an appointment to come and see it.
During the summer I try to do at least 2-3 fine arts festivals. I try to participate in solely art fairs rather than craft fairs. There’s a few really good ones in the Philly area, some in Long Island, some places in New Hampshire usually within the vicinity of 2-3 hours for 2 days. I generate some clients that way every year. The work sometimes it sells itself. As an engineer I’m not saying I’m depending on the work to survive.

How do you price your work?
I’m still working on it. It’s the effort. For me it’s not just the size it’s what the work represents, the craftsmanship and I would say the science behind it. As I’ve broadened my education of art I realized art is a science.

You spoke about your mailing list, what other means do you use to publicize your work?
In addition to the website? I’m just now getting into social media. I’ve discovered Instagram which is an amazing tool. I was sleeping on Instagram for a while. I’m slowly getting into the whole Facebook thing. I have a page for the website, I have a page for the gallery as well. It attracts a lot of artists. Twitter’s another one I’m trying to get involved with and I realize that’s a really powerful tool once you get the hang of using it.

Are there any upcoming shows?
No. Doing the gallery shows really take away from my work. I’m trying to juggle a day job and create for myself and doing shows. I don’t like to do back to back shows. I like to give myself at least three months to prepare for it and the administrative work alone takes a lot of energy. When you’re working with artists you have to collect the information, you have to send out the press release, you have to send out the calls, arrange pick ups, arrange the hanging times.

Would you like to put on more shows if you had more help?
Oh yeah, if I had a staff it would be so much easier. But a lot of people they don’t see the potential unless they have a big paycheck coming.

What would you like to have in the future?
I would like to see my work evolve. I would like to spend more time experimenting with my work and just getting it out there. From what I’ve learned positioning is important. It has to be unique and be in the right place where people can see it and it can move. The only way I can get to that is to focus on building a body. One of the projects I’m working on right now is using the t-shirts as a way to promote the art.

The t-shirt project was influenced from my snowboarding habit. I started snowboarding two years ago. It’s gotten to the point where it’s almost an addiction. It’s a good addiction. I used to hate the winters with a passion. Now I can look forward to them. So this design came up. I wanted to experiment with the style.

Some of them I create here in my home. The more complicated ones….one of the SONYA artists has a print shop down in the Navy Yard area. Really cool guy. He offered [me] to use his space. They’re all made by the artist. It’s not mass production. I decided to approach it like art with limited editions. The t-shirts will be uniquely numbered. For example, there’s going to be three women’s size small, medium, and large, 10 of each sizes. And each size is going to be an edition of 1 to 10. It’s going through the development stage.

Being a creative entrepreneur (in it’s many incarnations) is possible in Brooklyn. Now that you know a little about Kennis make sure you say hi if you see him around the Franklin Ave. C line.
Read More From This Issue
Evolution of a Creative Entrepreneur -Persons of Interest
Funding for Brooklyn Artists Made Easier
Create Your Own Brand With Matt Southerland

Risking It All for All the Beauty of It

While working at Compound Cowork’s Work Exchange Program I had the opportunity to collaboratively plan an event-Career Night At The CC. One of a co-working spaces greatest resources are their members and this Prospect-Lefferts Garden space was no exception with a … END_OF_DOCUMENT_TOKEN_TO_BE_REPLACED

If it seems like a new co-working space is opening up every year it’s because they are. Hard pressed to find one five years ago in Brooklyn there is currently almost 30 spread throughout the borough. Colab Factory is … END_OF_DOCUMENT_TOKEN_TO_BE_REPLACED