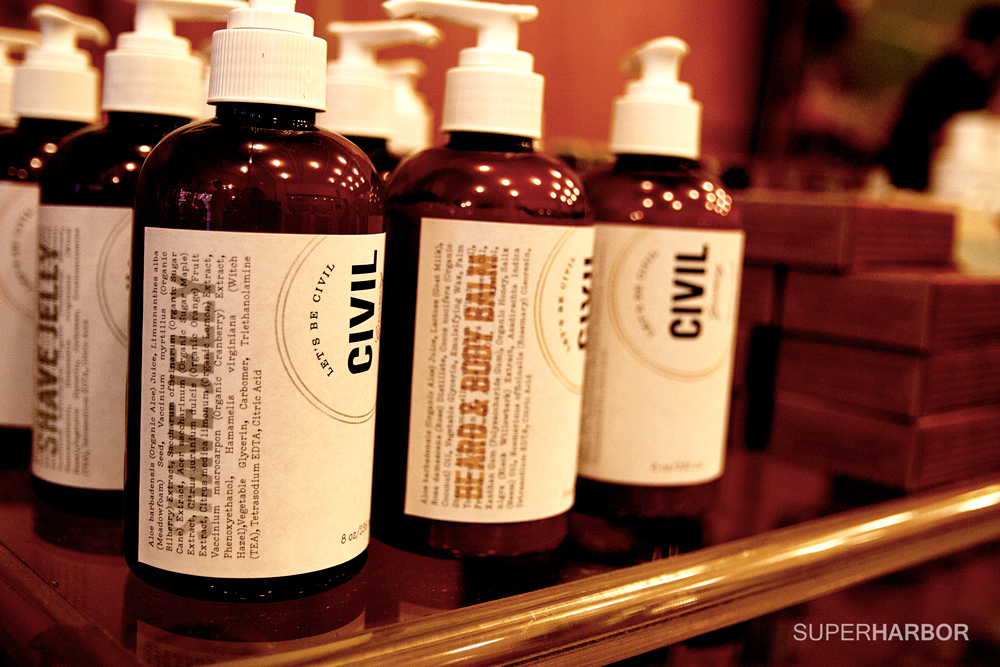 At Persons of Interest (Carroll Gardens location) we met Matt Southerland. The very first barber Steve hired, Matt was born in Sheepshead Bay and has been in the barber business since he was 18.

Hella motivated Matt has his own hair line Civil Grooming. The line includes a non-foaming aftershave gel (Shave Jelly), Beard & Body Balm and a good old fashioned aftershave sans alcohol. The whole line is made with organic ingredients. So we asked him:

What does It Take to Make Your Own Line?*

He was inspired by industry leaders like the founder of Aveda, and Ted Gibson, whom he’s worked for as an assistant. One day he and his girlfriend were watching a Marilyn Monroe movie where neat parts and glamor reigned supreme. From there he and his girlfriend came up with Civil Grooming together.

According to Matt it took 4 figures to get the line off the ground.

Matt and his co-founder and girlfriend came up with some sketches of what they wanted the logo to look like. Three different graphic designer friends helped make the final logo.

He researched suppliers on (where else?) Google, found an organic lab, sampled their products and branded them as his own, a common practice in the industry.

Civil Grooming is available online and in Persons of Interest.

Meet an Artist from 35 Claver Place

The Evolution of a Creative Entrepreneur-Persons of Interest

While working at Compound Cowork’s Work Exchange Program I had the opportunity to collaboratively plan an event-Career Night At The CC. One of a co-working spaces greatest resources are their members and this Prospect-Lefferts Garden space was no exception with a … END_OF_DOCUMENT_TOKEN_TO_BE_REPLACED

If it seems like a new co-working space is opening up every year it’s because they are. Hard pressed to find one five years ago in Brooklyn there is currently almost 30 spread throughout the borough. Colab Factory is … END_OF_DOCUMENT_TOKEN_TO_BE_REPLACED