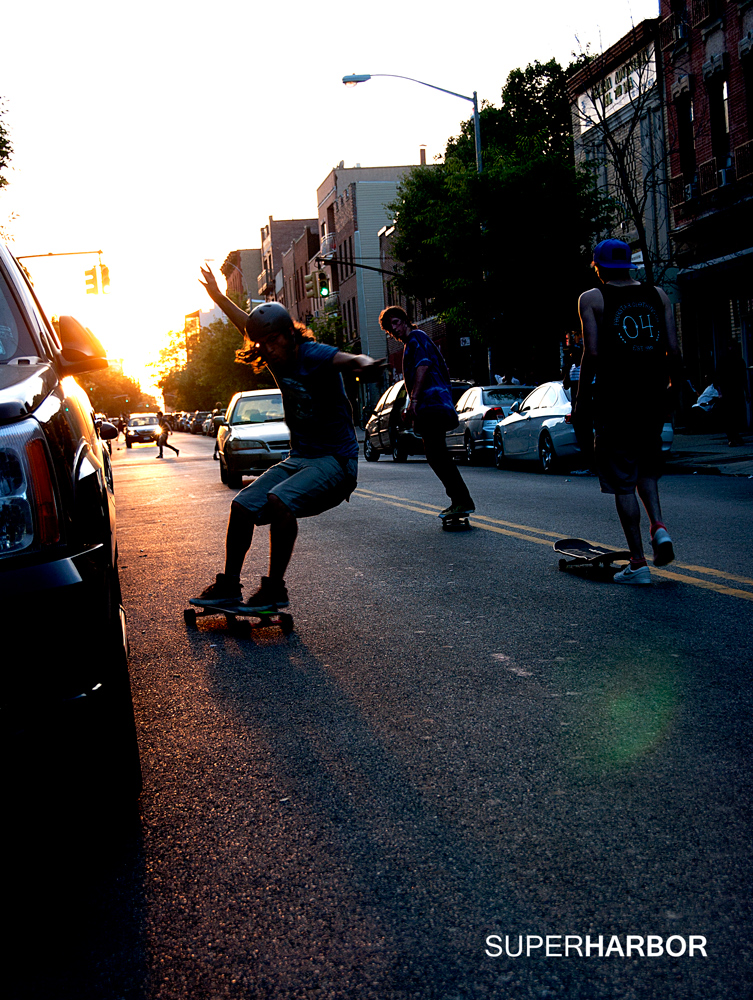 Bustin Boards is a fixture in the New York City push culture. And they’re growing. When we first met the longboarding company some years ago they only had the one store on Grand Avenue in Williamsburg, Brooklyn. Now that location has the honor of being the flagship as they have another one in the Lower East Side of Manhattan and a warehouse in Maryland. Their robust social media (their Facebook Page alone has 42,000 Likes and a high engagement rate) is handled by multiple people within the company.

Before the warehouse in Maryland, they did all production in the basement of the Williamsburg store. With it vacated it was prime for another purpose -an art gallery.

In the process of creating the boards mistakes such as warps would occur. They wouldn’t sell these boards because the company’s about high quality. “Why don’t we turn them into something so we’re not wasting them and turn them into art?” said Celia Helfrich, former Bustin Boards screen printer.

And that’s exactly what they did. “We had an idea about starting a gallery, got permission from Ryan [one of the owners] and he decided we should turn the basement into a gallery space.” Over 30 artists used those imperfect longboards as canvases for their own unique and eclectic style from your traditional painting to more bold 3-D creations. The opening held June 1 was curated by Celia who has a BFA from Parsons The New School for Design.

With Bustin Board’s stellar reputation in the push community and coinciding with the Bushwick Open Studios, which Celia says was not planned, the turnout was a steady stream of bodies coming in and out of the basement, wandering into the back and chilling in front of the storefront.

an early look into their operations

“Bustin is such a family of skaters it’s really comforting and friendly. It’s a cool thing for the community to come to,” she said.

Plans for further shows are in the works. The art gallery is free and open during store hours.

More From This Issue Community-Williamsburg

The Evolution of a Creative Entrepreneur-Hickies

Risking It All for the Beauty of It

Risking It All for All the Beauty of It

While working at Compound Cowork’s Work Exchange Program I had the opportunity to collaboratively plan an event-Career Night At The CC. One of a co-working spaces greatest resources are their members and this Prospect-Lefferts Garden space was no exception with a … END_OF_DOCUMENT_TOKEN_TO_BE_REPLACED

If it seems like a new co-working space is opening up every year it’s because they are. Hard pressed to find one five years ago in Brooklyn there is currently almost 30 spread throughout the borough. Colab Factory is … END_OF_DOCUMENT_TOKEN_TO_BE_REPLACED